To build a project (create a version of the game that can be played outside the editor), select the 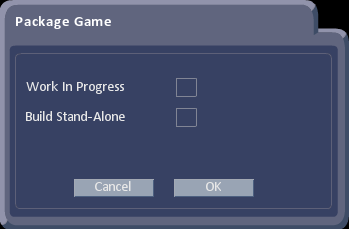 If the game is still being developed, check the Work in Progress check box to mark it as incomplete.

If you want to play the game via the Shoot 'Em Up Kit, uncheck the Build Stand-Alone checkbox then click OK. To play the game, go to the Main Menu and click Play. The new game will appear on the list of available games.

If you want to play the game independently or distribute it, check the Build Stand-Alone checkbox then click OK. The game package folder will be put the My Documents/Shoot-Em-Up Kit Projects/games/packages directory and will have the same name as the game. This folder contains all that is needed to run the game and can be moved or distributed. To play the game, run the [ProjectName].exe file in the folder.