To set up NPCs in a Formation, first create the Formation. Next, add the NPCs which are to be placed in the Formation and set their AI behaviour to Formation.

To add a Formation to the scene click the Formation icon

on the Tools Menu and the cursor will change to a Formation symbol. Move it to the position of the first node of the formation and click to place it. Move to the next position and click to place another node. Repeat until all points are placed then click the Stop Placing button at the top of the Properties window or press the [Esc] key.

The Formations window will open when a Formation is added or selected. It will have three tabs:

Actions - sets up actions for the formation

AI - sets up the behaviour of the formation

Formation nodes can be moved or rotated by using the Move Gizmo, or by manually editing the position values in the General tab. Clicking on a formation node will make it the current node and the Gizmo and Properties will apply to that node. 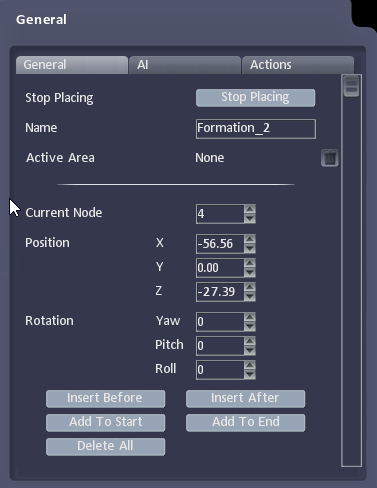