Pop-ups are sprites or text that appear on screen during a game. They can be triggered by Timers, Triggers or as Player or NPC Actions. They could be used to display information when the player reaches a trigger or collects a bonus, or to show a conversation by showing text pop-ups triggered by timers (these could include sound cues with spoken text).

To create a pop-up, go to the HUD Editor by selecting the

icon on the Tool Bar. Click the Pop-Up Event icon

on the Tools menu to display the Pop-Ups menu: 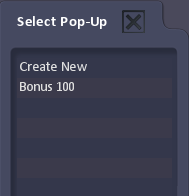 Select a pop-up to edit or Create New to create a new one. The General window will open and the message Editing PopUp [name] will appear at the top left of the screen. 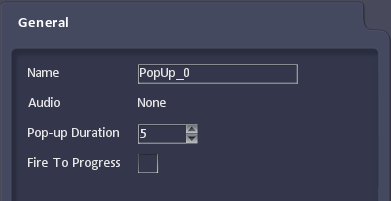 Use the Tools menu to add

video to the pop-up in the same way as in the HUD Editor.

When the pop-up is complete, click Done on the Tools menu to return to the main HUD Editor screen.

Pop-ups can be set to be displayed when a Wave of NPCs is destroyed or in the Actions Tab of a Player, Object, NPC, NPC Generator, Timer, Trigger or Formation.