This tutorial explains how we built the Asteroids template. The template is included ready-made in the Shoot 'em Up Kit and you can create a new game using it as a starting point. 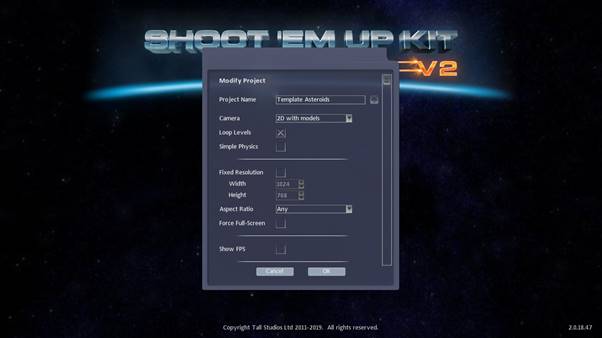 Give the project a name. 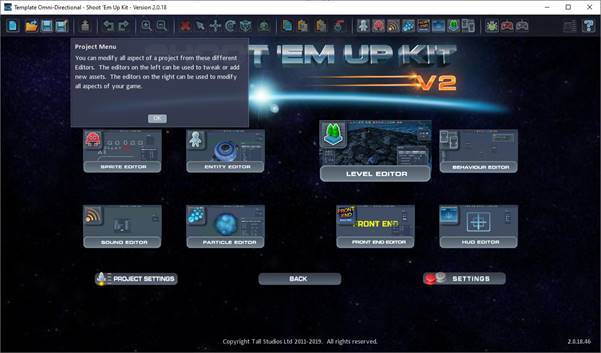 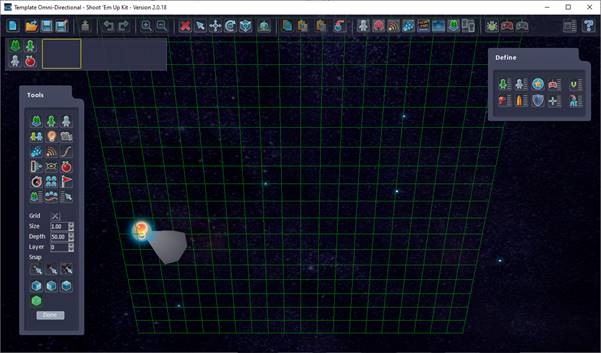 The scene is empty except for a single directional light. A grid to help visualise the area is shown. Because we selected to create a 2D game the objects we place will be placed on this plane by default.

The first thing we will add to the scene is a ship for the player to control. Click on the 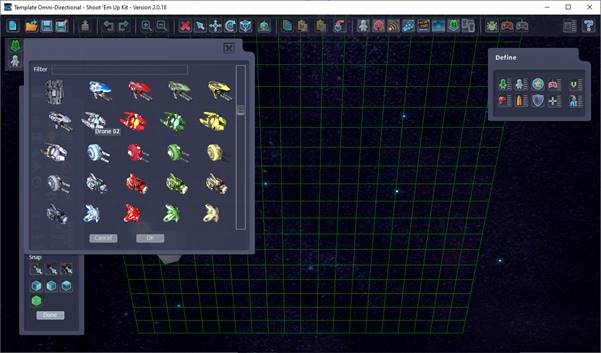 Then place the ship somewhere near the centre of the screen. 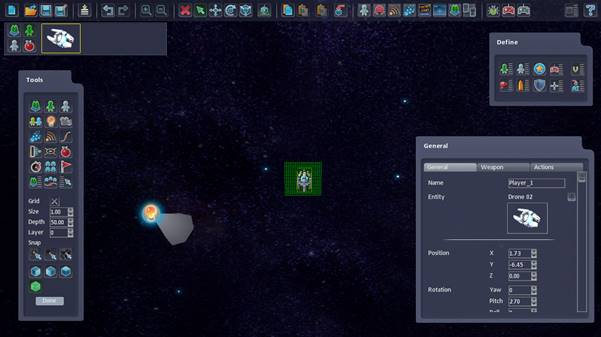 Definitions are a small collection of properties that you can tweak for you project. The Player Definition, for example, has properties such as the number of lives, Health, and how long the player is invulnerable at the start of a game.

You can apply the same Definitions to multiple items in the scene. For example, you can have an NPC Definition shared by all the NPCs in a formation so that each NPC has the same health – and tweaking the NPC definition will affect all the NPCs which are using it.

In the classic Asteroids game, the ship can only move forwards. It uses a thruster to set momentum and keep the ship moving. We’ll use a simplified version for this tutorial.

Select the Left Analog -Y property that is currently set to Move Backwards. Change this to Unused so that the ship can no longer move backwards. Click the OK button and close the definition list.

The ship currently rotates quite slowly so we will alter the movement definition to speed up the rotation. With the Player selected, and the General properties window open, go to the Movement Definition and click the arrow to go straight to the Rotate movement definition.

Increase the Max Rotation Speed to 4.

We want to limit the player to an area of the map so that we can generate asteroids outside of this area and let them move across as a hazard to the player.

Set the Name to Play Area 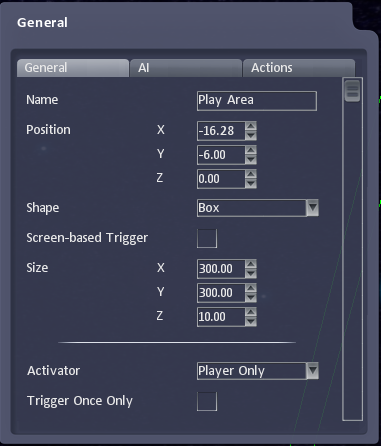 To limit the player’s movement to the active area we need to select the player again. In the properties window set the Active Area to Play Area and the Area Action to Wrap.

Select Boulder 01 and double click it or press the OK button. 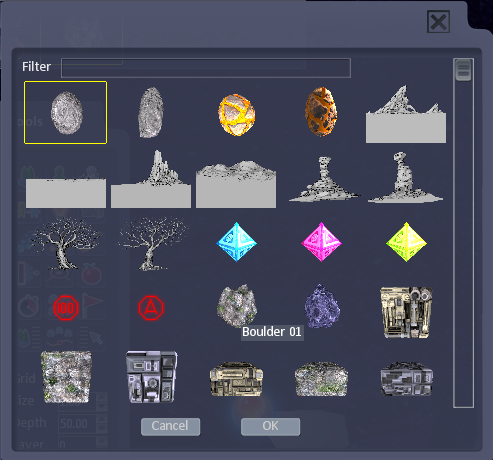 Place a few nodes around the outside of the play area by clicking on the map. Three or four is probably enough as their direction will be randomised.

You can zoom the map in or out using the mouse wheel to help visualise placement.

In the template game we have created three nodes all along the right-hand side of the playing area. Because the directions will be randomised, and the active area will wrap items from one side of the map to the other, it is alright to just place the NPC Generator nodes along one edge. 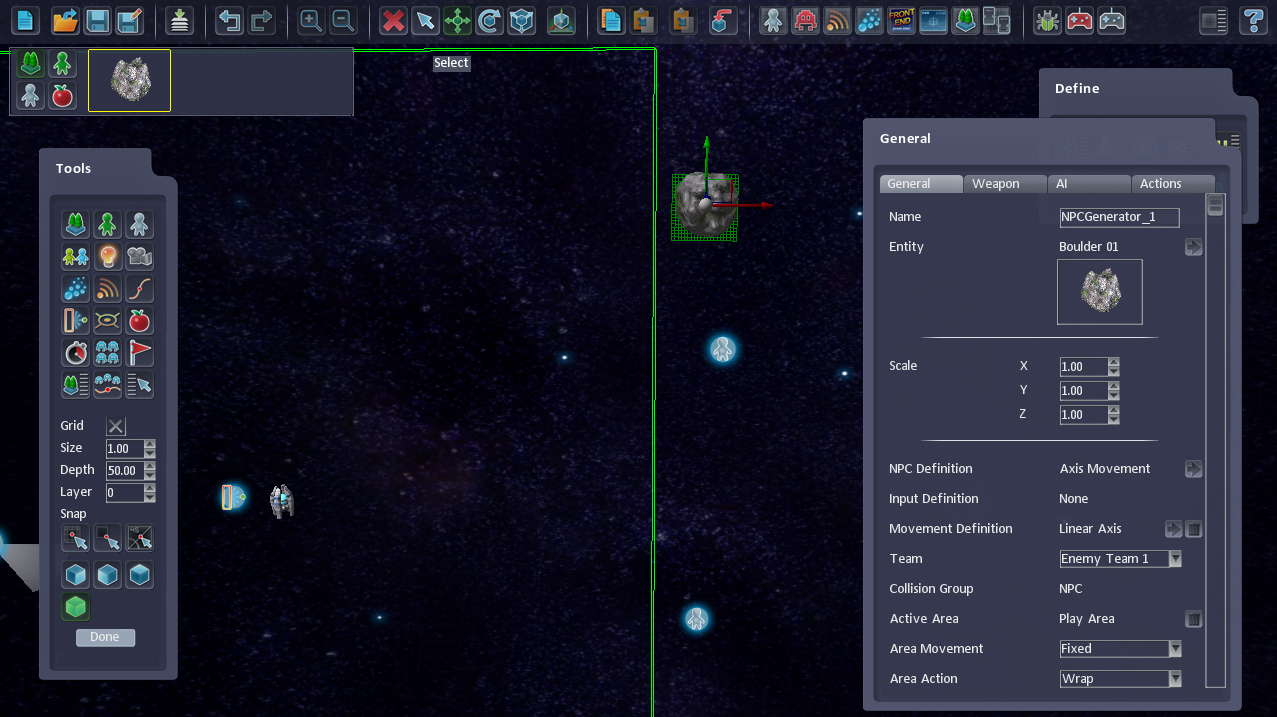 We will now set-up the NPC Generator to spawn asteroids at the rate we want and to use the active area we created in a previous step. 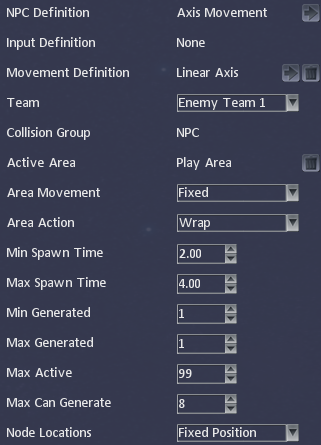 First, we will set Movement Definition to Linear Axis. Open the Linear Axis definition and change movement to Linear Proportional (to do this, click the arrow next to the Movement definition in the properties window or open the Movement Definition list from the Define menu and select the Linear Axis definition). This will allow the asteroids to move in full 360 degrees. AI uses virtual input to steer the asteroid just like the player does to steer the ship. If we use proportional input, then the AI’s virtual joystick can move in fine detail and the asteroid can move in many directions. If we use linear directions, then the virtual joystick will be limited to extreme X and/or Y which would limit the asteroid to 8 directions.

Set Active Area to Play Area, which is the Trigger/Active area we created earlier.

Set Area Action to Wrap. This will allow the asteroids to wrap from one side of the active area to the other.

Set the Min Spawn Time to 2 and the Max Spawn Time to 4. This will spawn each new asteroid at a random time between 2 and 4 seconds.

Set the Max Can Generate to 8. This will restrict the NPC Generator to spawning 8 asteroids. Feel free to play around with this number. Small values make the game easier and greater values will make the game very chaotic.

Click the AI tab so that we can set the AI behaviours for the asteroid. This will be limited to moving in a randomised direction and rotating to provide a visual effect. 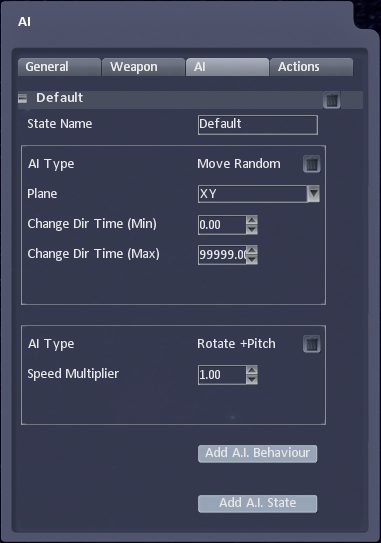 Set the Plane to XY

Add another AI Type by clicking the Add A.I. Behaviour button. We will add some rotation to the asteroids to make them more interesting.

Leave the Speed Multiplier property at 1.0 as this is a good speed for the rotation effect.

Uncheck the option Disable when leaving Camera to prevent the asteroids from being removed when they leave the screen. We want them to stay active so that wrap around the playing area back onto the other side. 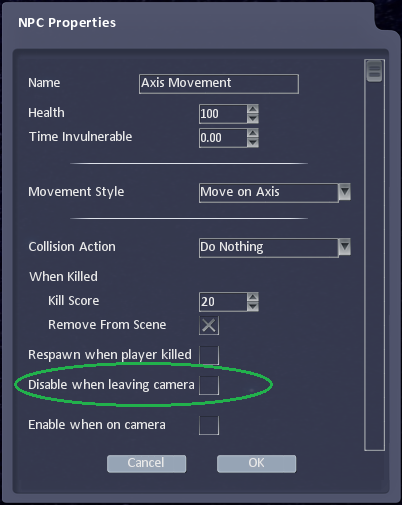 Camera from the Tools pane. Move the green target icon into the centre of the playing area, where the player is, and click to place the camera.

All the defaults for the camera should be good. The camera will be positioned 200 units back, which should be a good distance. We don’t need the camera to move or track the player and so we can just test the level and see the new camera in action.

Add an NPC Generator that spawns an enemy ship that can fire at the player. Try new [[AI Tab|AI behaviours, such as setting the ship to chase the player or perhaps use Move Random but set the Min and Max change direction values to 2 and 5, and use an Area Action of Destroy Self.

Add thrust to the ship (in the Input Definition).

Add movement to the background. Make it slowly rotate.

Speed up the rotation of the ship (in the Movement Definition).

Spawn asteroids that take 2 or more shots to destroy by changing the health and projectile damage.